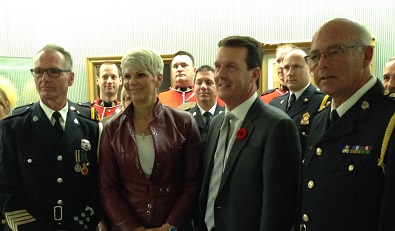 Grants to fund specialized policing units in the province have been renewed with the Regina department getting $4.6 million.

It is part of the provincial government’s total commitment of $14 million to a number of municipal forces. The money is earmarked to fight things like child exploitation, gangs, and career criminals.

Corrections and policing minister Christine Tell made the official announcement in the legislative building Thursday morning, flanked by Regina’s mayor Michael Fougere, and police chief Hagen. Tell says it is part of an ongoing partnership between the province and police forces aimed at addressing key community safety priorities.

“Our policing services do a great job throughout the province, this just allows them to specialize a bit more,” she said.

Part of the funds will be used for the organized crime and gang unit as well as the Integrated Child Exploitation (ICE) unit. Both are province-wide ventures that have members in the Saskatoon, Prince Albert, Regina, and RCMP detachments. It investigates about 200 cases a year, resulting in dozens of arrests and hundreds of charges.

The provincial coordinator of the unit, Staff Sergeant Ron Weir, says police would have a difficult time keeping up with Internet sexual predators without additional funding.

“Bad guys’ technology has also advance but we continually change our law enforcement tools to combat that,” he said.

“It is a daily struggle, but with the support we have from the provincial government we are able to continue that training and expertise on our side as well.”

“So it is hugely significant for the Regina police service and we are certainly appreciative by the ongoing commitment of the provincial government to continue the program,” he said

The provincial government began providing the municipal police grants in 2009. It currently provides enough money to fund 125 police positions and initiatives across the province.