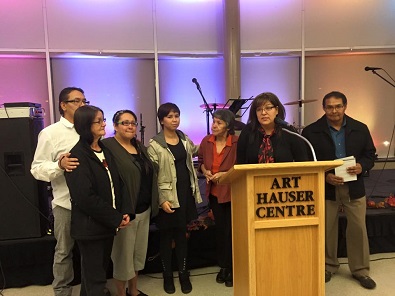 PAGC created the commission 25 years ago to strengthen the voice of northern women.

Montreal Lake’s Shirley Henderson has been involved right from the start. She had been a band councillor in Montreal Lake in the late ‘80s, and the grand chief invited her and two other women to help form PAGC’s Women’s Commission.

Henderson, the commission’s chair, explains why it was a priority for leadership.

“They needed a voice for women within the Grand Council. They felt that the women weren’t being strongly represented in the north,” she said.

The first challenge was making sure that there’s fair representation. The final decision was to have leadership in each of PAGC’s 12 First Nations appoint one woman to the commission, with the exception of the large area covered by Lac La Ronge Indian Band and Peter Ballantyne Cree Nation, who have two women appointed.

The women’s commission has had a seat at the table with PAGC’s chiefs since 1990.

Henderson says their seat is treated with just as much respect as those elected.

In addition, the commission advocate for women-specific treaty issues and issues with violence in communities, family, and in urban settings.

They’ve had a family violence worker for over 10 years, with the help of provincial funding.

“We’ve been trying to further that by trying to get more workers in that area but it’s been so hard to get additional funding. So we have one worker in family violence that has to represent 30,000 people,” Henderson said.

The group has helped support individuals – one example is Marlene Bird, a Timber Bay resident who was brutally assaulted in the summer of 2014. The Women’s Commission has provided furniture for her, and Henderson speaks to her often as emotional support.

On top of all that, the Women’s Commission has an annual walk to support the cause for murdered and missing indigenous women and operates an apartment complex that’s geared toward single mothers.

The group is celebrating its 15th year of offering scholarships to women going into post-secondary education.

“We’re seeing a lot more women in post-secondary than we’ve ever seen before which is great, it’s great to see that and they will be an asset to the community in all areas, health education, economic development,” Henderson said.

A banquet earlier this week helped mark these milestones.