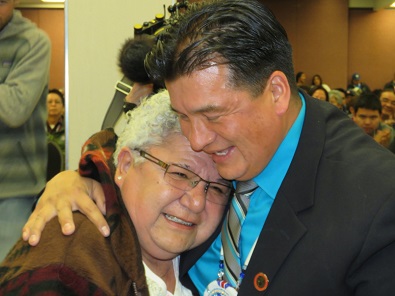 Bobby Cameron spent the last five years on the road visiting every First Nation in Saskatchewan either campaigning or working.

He was a member of the Federation of Saskatchewan Indian Nation’s (FSIN’s) executive member, who met with and remembered the names of hundreds of Chiefs, band councillors and band members.

Many of the community members describe him as down to earth and someone they can count on for support.

Those friendships and relationships paid off big for Cameron as he was handed an overwhelming mandate, receiving more than 75 per cent of the vote and getting elected Chief of the Federation of Saskatchewan Indian Nations.

Cameron won with 758 votes while his two challengers Helen Ben and Leo Omani each received 105 and 69 votes respectively.

Following the official swearing in ceremony Cameron spoke with reporters about his priorities.

“Today marks the beginning of a new era, what I mean by a new era, Prime Minister Trudeau and his comments about working with Indigenous people on a nation-to-nation basis based on our inherent and treaty rights,” said Cameron.

“For the first time in a long time the federal government has verbally committed that and we’re happy to hear those and now it’s just a matter of getting these meetings set up, so we can get them to commit in writing based on our inherent and treaty rights.”

Cameron will lead a balanced executive that consists of First Vice-Chief Kimberly Jonathan, who was acclaimed; Third Vice-Chief Edward “Dutch” Lerat, also acclaimed; and Heather Bear, who just celebrated her first anniversary as the fourth vice-chief.

Rounding out the executive is newly-elected second vice-chief Bob Merasty from the Flying Dust First Nation.

The new second vice-chief comes to the job with experience, as he is the former Chief of the Flying Dust First Nation and worked for the FSIN when Perry Bellegarde was the Chief in the early 2000s.

“I believe our role as leaders is to build relationships, build bridges for our people, to advocate for our First Nations,” said Merasty. “I want to say to industry and government out there, we’re about building partnerships and relationships.”