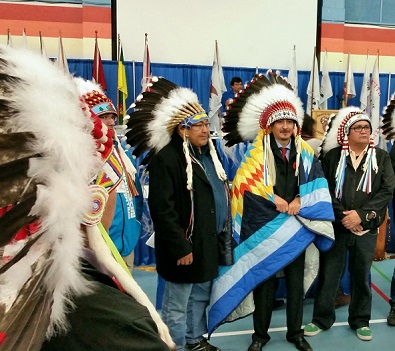 It was clear long before all the ballots were counted at Prince Albert Grand Council’s annual assembly that Joseph “Smy” Tsannie would be keeping his seat as Athabasca vice-chief.

Tsannie was up against former vice-chief Don Deranger and activist Colleen Whitedeer.

Tsannie received 186 votes, Deranger received 30, and Whitedeer 22. That means 78 per cent of people voted for Tsannie.

In her speech, Whitedeer raised a few eyebrows and got some laughter as she bluntly said “well, I guess I got my ass kicked, hey?” She added that the campaign was a learning experience, and will continue to participate in politics.

Deranger received 30 votes. He says Elders asked him to run again, and while up at the mic Deranger had some strong words for the PAGC.

“There’s no unity in the Grand Council right now as I see it. We’re falling apart. I don’t think I’ll ever put my name in the hat again, even if the Elders ask me to I’ll say I can’t. I’m going to move on,” he said.

Tsannie shut down that idea in his speech, saying – to strong applause – that there is unity within PAGC.

Tsannie has been involved in First Nations politics from a young age, and says his landslide win has been years in the making.

He said connections with leadership in his community of Hatchet Lake and communication with his people have made him confident.

Tsannie says as a younger member, he brings some “spice” to the PAGC because he thinks outside the box.

The future of the Athabasca area lies in strengthening the youth, he said.

“We need to take care of our own. So when you look at the young people, where things are at, we have a big challenge,” he said, referring to suicides, poor housing, limited educational opportunities, alcohol addiction and drug abuse in northern Saskatchewan.

Tsannie used the example of a wolf pack to describe the importance of youths.

He said he wants to give hope that communities can provide better services and programs for the youth.

Roads and affordable groceries in the north are on the long list of items Tsannie plans to advocate for now that he’s earned a second mandate in the Athabasca region.

The election of a federal Liberal majority has brought him hope, but Tsannie plans to hold leader Justin Trudeau accountable on education promises.

“I’m putting a lot on the Liberal party because they came to our communities, they say ‘we’re going to do this and that for the education and all that,’ yeah hopefully those doors are still open and be a man and say what you’re going to do. So, I’ll be going to Ottawa and visiting the province.”

He said he wants spread the message of the positives in the Hatchet Lake and Athabasca area – things like its healthy environment and business success.