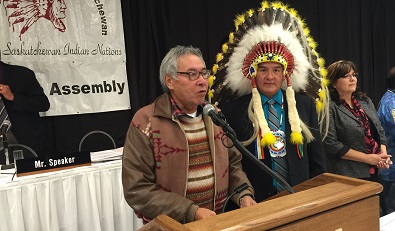 The Federation of Saskatchewan Indian Nations delegates made a clear choice for their Chief, handing Witchekan Lake’s Bobby Cameron an overwhelming mandate to lead the FSIN for the next three years.

Cameron won with 758 votes, or 75 per cent of the vote, while his two challengers Helen Ben and Leo Omani each received 105 and 69 votes respectively.

Bob Merasty was elected to the Office of the Second Vice-Chief, defeating Guy Lonechild and Rod Atcheynum.

Kimberly Jonathan and Edward “Dutch” Lerat were both acclaimed as the first and third vice-chiefs respectively.