Problem gamblers to play games of ‘no chance’ under new law 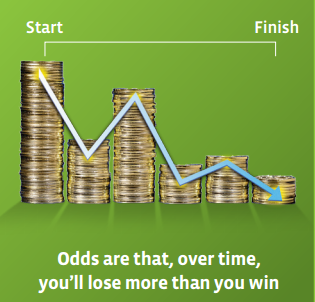 If you are a self-proclaimed gambling addict, casinos in the province are giving you one more incentive to help you break the habit.

New regulations are being put in place that will prevent people on a special list from collecting their winnings. This means individuals can self-identify as problem gamblers to be put on an exclusion list that allows a casino to withhold prizes and to refuse to allow people to gamble.

If there is no chance of winning, there’s no incentive to play, explained SIGA vice president of corporate affairs, Pat Cook. She said she expects the law could be challenged but says most people will welcome it.

“It’s like anything, there are people that will likely go out and make a challenge,” she says. “But really this is an attempt to help people who are struggling with problem gambling so I see it as a positive, rather than a negative and hopefully people will comply with that.”

In terms of enforcement and compliance,   it’s up to the problem gambler to put themselves on the list and to adhere to the rules. The winnings will then go back into the casino funds for community programs and services.   The new regulations take effect October 1.

Saskatchewan is only the second province in Canada to implement such a policy.

There are currently 545 people on the “No Play List” for Casino’s Regina and Moose Jaw.