Life in prison for man who killed son outside Prince Albert 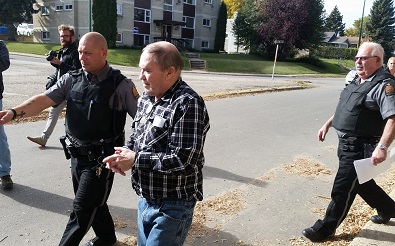 A man who shot his son to death on a farm outside Prince Albert will serve the mandatory minimum sentence for second-degree murder.

On Tuesday, Larry McDougald, 68, was sentenced to life in prison with no chance of parole for 10 years for killing his son Terry McDougald on October 29, 2013. Larry’s case had been set for trial starting Monday, but it came to an abrupt end when Larry entered a guilty plea.

At the sentencing, the Prince Albert courtroom heard the fatal confrontation between Larry and Terry stemmed from a fight over “ownership of some old trucks that really aren’t worth that much and some other trucks that were on the property (of Larry) at the time,” said defense lawyer George Combe.

Larry and Terry’s dispute dated back years, with both saying they were the rightful owner of vehicles that had to be auctioned off after a divorce between Larry and his wife.

The night of October 28, 2013, Terry was joined by two other men when they took a semi-trailer off Larry’s farm, which is just outside Prince Albert, according to the facts read out in court by Crown prosecutor Cameron Scott.

The men had expected Larry to be away from home when they went to retrieve the property. They did so “because Terry did have concerns,” that if Larry was home Terry “it wouldn’t go well,” Scott said based on interviews with the two men who had been with Terry.

The following morning around 3 a.m., the three men – led by Terry – returned to Larry’s property to take several more vehicles. But three hours later, the men were still struggling to get them running.

Larry had been at home sleeping the entire time, but hadn’t heard any of the commotion because he didn’t have his hearing aid in, said Combe. After waking up and going through his normal morning routine, Larry noticed one of his semis was gone and saw an unfamiliar new vehicle on his land.

He went outside, with his Winchester .30-30 rifle in hand.

When Larry saw the men at the semi, he fired two shots in quick succession, one of which hit his son. Terry fell to the ground from the truck, and it was “clear Terry is yelling in pain,” Scott said. Larry approached him and fired another shot at Terry’s back.

It wasn’t until Larry rolled Terry over that he realized it was his son he’d killed, Combe said.

Larry then proceeded to call the police, saying men had been trying to steal his property and that he’d shot one of them, Scott said. Larry’s calm demeanor led the woman on the other line to question if the call was real, Scott said.

It was never explained in court why Larry fired the second shot in the back, aside from that proving his act was murder not self-defence.

Larry did speak briefly when Justice Scherman gave him a chance to address the court.

“There’s nothing I can do to bring Terry back,” Larry said, with tears in his eyes.

The Crown and defense said their joint submission involved compromises on both sides.

Speaking in court, Scott mentioned three factors he considered. The first was that Larry had no criminal record, and the second is Larry’s age. At 68 years old, he’s undergone cancer treatment for quite some time, Scott said. The third was that Larry has admitted guilt.

“It’s a situation where you have some of the family on one side, some of the family on the other side and they are exceedingly upset by the fact that a brother, father, uncle, has passed away. And more so it was trying to get to grips with what’s happened and how it’s really impacted them,” he said.

In court, Combe referred to the statement by Terry’s wife, Sharrie Bear, which said Larry’s split-second decision to shoot has caused immense suffering to his family as a result.

The McDougald family declined to comment to media following the sentencing.