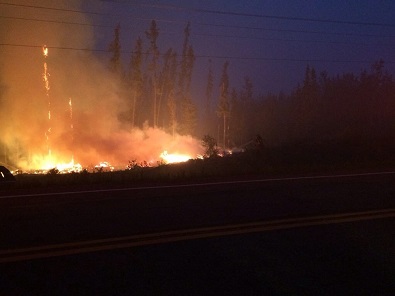 The Eli Fire in the summer of 2015. Photo courtesy Tammy Cook-Searson, Facebook.

A survey on the effects of this summer’s wildfires and evacuations on businesses in the La Ronge area is complete and has been released to the public.

The Northern Wildfire Recovery Business Survey was done by the Keewatin Career Development Corporation (KCDC) in cooperation with the provincial Ministry of Economy.

It was conducted between July 27 and August 7, and 51 out of an estimated 225 businesses in the region provided input.

KCDC CEO Randy Johns says as expected, the shutdown had a huge impact.

“Most businesses felt that the impact was fairly severe, most got their employees back but some did lose some employees as a result of the fire and evacuation, some were saying, and it’s a fairly common theme, that it will take about three months to recover.”

Johns says tourism took a major hit, but it wasn’t the only sector affected.

“Anybody that was doing services, any kind of trade services, construction, that gets put behind so some of them lost revenue as well, so it was really the peak period of a lot of business’ cycle that got affected here.”

The survey by KCDC did not establish a dollar figure for the amount of money which may have been lost by businesses in the La Ronge, Air Ronge and Lac La Ronge Indian Band area.

The results of the survey can be read or downloaded at the Northern Wildfire Recovery website and Facebook page.