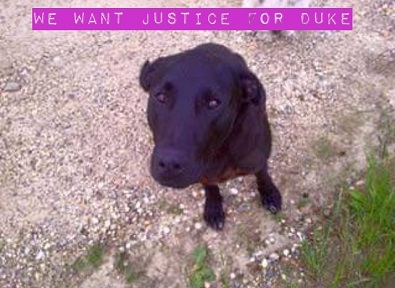 Duke is the subject of a complaint to RCMP. Photo courtesy “We Want Justice for Duke,” Facebook.

An online petition demanding justice for a dog shot by RCMP on the Key First Nation last summer has now gathered more than 150,000 signatures.

Video of the shooting was originally placed online last year, but the social media frenzy over the dog’s death reached a fever pitch this week. It was reposted and picked up by a U.S. website, among countless other video feeds.

In response to complaints and an onslaught of Facebook posts accusing the RCMP of being “dog killers,” the RCMP posted about the incident, in which officers were arresting Adam Cote. He had been hiding in a residence in the Kamsack area and was wanted on several charges including aggravated assault, assault causing bodily harm, and break and enter.

The following explanation of what happened with the dog, Duke, appeared on Saskatchewan RCMP’s Facebook feed:

“During the arrest, an RCMP Police Service Dog was attacked by a dog at the residence. Fearing for the safety of the Police Service Dog, an RCMP officer discharged their firearm at the dog. After the initial firearm discharge, the wounded dog was lying in the grass injured and out of compassion was euthanized by the RCMP member. RCMP say the animal was shot after it attacked a police dog that was being used to arrest a suspect wanted on an outstanding warrant.”

The dog’s owner, Justine O’Soup, says the Mounties did not have to kill her family’s dog. It was her boyfriend, Cote, who was being arrested in the video. Many comments related to what happened counter the RCMP’s account, saying the video showed the dog laying on the ground when the officer shot.

Now, the signatures are coming in by the thousands from all over the world.

The matter is the subject of a formal complaint filed by O’Soup, but she is still waiting for answers.

Duke was a family dog that had been with the O’Soups for over a decade. Justine O’Soup’s 15-year-old sister took the video at the centre of the controversy. According to family members, she was traumatized by the incident.

The RCMP issued this statement regarding the complaints:

“Incidents like this are difficult for everyone involved. We understand the compassion that’s been expressed by everyone through social media and we also understand and welcome the questions that an incident like this can raise.

At the time of the incident, we received several public complaints which are currently under investigation and nearing completion. This is an important step in ensuring the public has the ability to question the actions of police.

In the meantime,   the petition web site called, “Justice for Dukey” is getting signatures from as far away as Germany, the United Kingdom, Malta, Malaysia, Spain, and Venezuela.

They are coming in by the hundreds every hour.