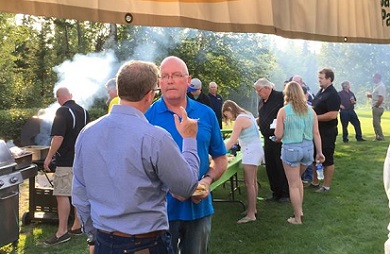 Premier Brad Wall says he believes this summer’s wildfires will be an election issue in the Cumberland riding come next April.

The premier says people were talking about Sierzycki’s leadership nationwide during the height of this summer’s wildfires — but he also admits the scale of the crisis ensures the fires will come up at election time.

“Oh, I think so,” he said.  “I mean it can’t come that close, and we can’t go through the largest evacuation ever and the largest fire in proximity to the community ever, without it being on the minds of people.  And so we need to respond.  Not so much as part of the election cycle, but just as a part of a government.  We want to be listening and we want to be open to the fact that there could be improvements and, where it’s possible, then to make those improvements.”

On Thursday in Prince Albert, the premier received feedback from Prince Albert Grand Council officials about the province’s wildfire policies.

Wall said the end of this debriefing period is in sight.

“We’re getting near to the point where we could start putting together — I think the Minister of Environment could start putting together — recommendations for cabinet on any changes, either to Wildfire Management policies or what happens in terms of evacuations,” he says.  “But we’ll have that ready to go and it will be a very transparent process.  We’ll report back to all the stakeholders and the leadership that have provided input into the process.”

He said they don’t want to rush the review, but any changes have to be in place by April.