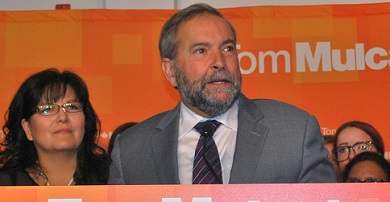 If elected to government, NDP Leader Thomas Mulcair says his party would take several steps to end violence against women.

One of these steps would be to launch a national inquiry into missing and murdered Indigenous women within 100 days of forming government.

Another step would be to put in place a national action plan for ending violence against all women in Canada.

The announcement was made during an election campaign stop in Saskatoon on Aug. 31 with about 300 supporters on hand.

Mulcair says an NDP government would commit $40 million over four years to restore the Shelter Enhancement Program and ensure no woman or child is ever turned away from a shelter.

“In April of 2014, on just one night, 338 women and 201 children fleeing violence were turned away from shelters because there weren’t enough spaces,” he said. “That’s unacceptable in a country like Canada.”

The NDP says its plan would create or renovate more than 2,100 spaces in first-stage shelters and nearly 350 spaces in transition houses. The party also says it will work with women’s groups and indigenous families, communities and organizations as part of establishing its national action plan to end violence against women.

The Harper government has repeatedly rejected calls to launch a national inquiry into missing and murdered Indigenous women. Liberal Leader Justin Trudeau was also in Saskatoon a few weeks ago to announce his party’s plan to address the funding gap in First Nations education.

If elected, the Liberals say they would commit $2.6 billion over four years toward First Nations education.

The NDP has yet to announce its plan for First Nations education.

Mulcair and the NDP have also been on the hot seat in recent days over the party’s commitment to balance its first budget in spite of the fact it appears the economy may be headed into recession.

The Liberals say they would be willing to run deficits of $10 billion for three years before balancing the budget in 2019-2020. This spending would be used to address aging infrastructure and stimulate the economy.

The NDP leader says the cancellation of income splitting and a corporate income tax increase would give the party enough money to balance the budget in its first year in office.

Other campaign commitments, such as bringing in a national childcare program, could be put in place over the course of a four-year mandate, Mulcair said.