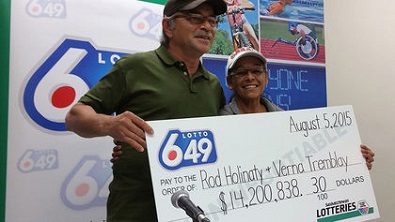 Two life-changing events have come in quick succession for a La Ronge couple.

Rod Holinaty is the $14.2 million winner of August 5’s LOTTO 6/49 draw. The announcement came in Saskatoon on Friday morning.

He said at that conference, he had a pressing question for his partner, Verna Tremblay soon after he checked their lottery ticket.

“I asked her, ‘do you want to marry this millionaire?’” Holinaty said in a news release from Saskatchewan Lotteries.

The now-engaged couple won on the $14 quick pick, which he had bought at La Ronge’s Country North Confectionary.

As one might expect, Holinaty checked his ticket at a self-serve machine numerous times to confirm the big win.

Tremblay joked that she’d been bugging him to check to ticket because she knew the winning ticket was sold in Saskatchewan.

“When he asked me to marry him, I knew we must have won.”

The big win is sinking in for the couple, who haven’t made definite plans with their win besides planning to travel and help family.