Helping the homeless in Regina 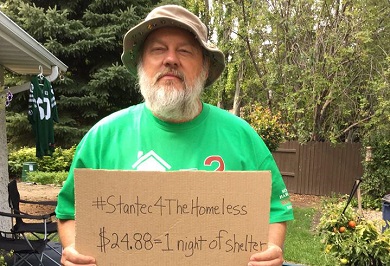 The executive director of a homeless shelter in Regina is providing heightened awareness of the plight of the homeless by camping out on the roof of the building for five days.

It has become a yearly ritual for Joe Miller, the executive director of Soul’s Harbour Rescue Mission. The aim is to raise money and to raise awareness. He is hoping to raise about $62,000. That would provide about 2,500 nights of shelter for one homeless person.

Miller climbed onto the roof of the mission during the noon hour on Monday, and will come down on Friday. He said he expects it will be a grueling, but worthwhile, week.

“Well, we hope to hit our goal, this year is our 25th anniversary,” he said. “It costs us $24.88 to provide one night of shelter and that includes not just a safe place to sleep, but a meal and a shower and company and hope.”

Joe will sleep in a pup tent, and his food will be hoisted up in a bucket. He’s got a porta-potty to take care of his needs when nature calls, and he will be on the phone pitching his cause through media outlets and pushing for donations.

A recent homeless survey in Regina found there were 232 homeless people in the city.

This is the sixth year for the nights of shelter homeless fundraiser at Soul’s Harbour.

You can find out more about Joe Miller’s fundraising drive by checking his web page or on Twitter.