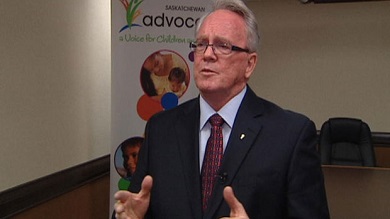 The province’s children’s advocate says poverty in Saskatchewan is largely an aboriginal problem that the entire province and the provincial government should be moving quickly to address it.

Bob Pringle, Saskatchewan’s children and youth advocate, was responding to the recommendations of a poverty reduction advisory board which unveiled a six-point plan to reduce poverty by 50 per cent by the year 2020.

“We have got to pay one way or the other and the longer we wait the more expensive it is and then we are picking up the pieces,” he said.

Pringle said the recommendations do address early intervention as well as education and training – areas he calls important and priorities. He said he thinks they will go a long way to cutting costs in other departments like justice, corrections, and social services.

He said the face of poverty in Saskatchewan is largely aboriginal, and children. He says the First Nations numbers tell the story.

“Would we allow two-thirds of non-aboriginal children to live in poverty?” he asked. “No we wouldn’t, you know but we don’t like to talk about racism and those kinds of things.”

Social services minister Donna Harpaur welcomed the recommendations but did not commit to any of them. She told reporters the province is in the middle of a tough budget year because of forest fires and the drop in the price of oil.

Pringle remains cautiously optimistic, but said the last couple of budgets have not been that good for programs that address the issues of poverty.

“I know we will have a tough budget coming but I hope that children don’t pay the price that they paid in the last budget,” he said.

To further complicate matters, the federal government is responsible for on-reserve funding, while the provinces deal with non-status aboriginals living off reserve.

Pringle says the federal government has not been living up to its commitment. While Saskatchewan has made some progress, it’s been too slow, he said. Pringle is also encouraging the provincial government to exert more pressure on Ottawa to deal with poverty in the First Nations community.

Saskatchewan and Manitoba lead the nation in the number of aboriginal children under the care of social services.